The Star and the Sheriff 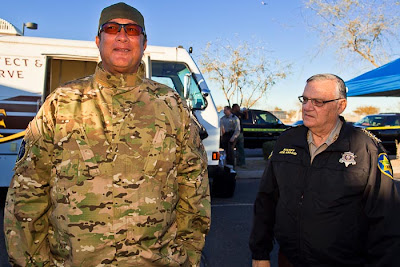 Maricopa County Sheriff Joe Arpaio is in the midst of his 18th “crime suppression” sweep through the Phoenix metro area. He held a 30 minute press conference yesterday to talk about the sweep’s accomplishments. Then one of his spokespeople let drop that Hollywood superstar and martial arts champion Steven Seagal was in town to participate in the sweep as a volunteer lawman.
A few minutes later Seagal came out dressed in his camo garb, shooting glasses and backwards baseball hat. Seagal chatted with the deputies and the sheriff before wandering off. He didn’t say anything to the reporters. The photographers were more interested in photographing Seagal than Arpaio.
Posted by Jack at 13:28

Meet the New Year, Same as the Old Year 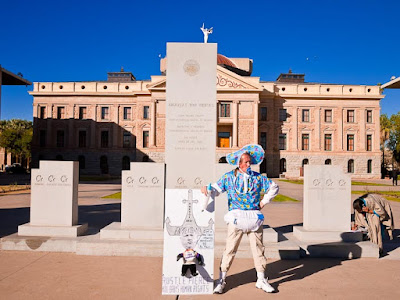 2010 ended with immigration being the hot topic in Arizona and 2011 is starting the same way. The Republicans in the Arizona Legislature introduced a bill today to bar US citizenship to US born children of undocumented immigrants. Their bill seems to be in clear violation of the US Constitution, a document they claim to hold close to their hearts. The 14th Amendment says, “All persons born or naturalized in the United States, and subject to the jurisdiction thereof, are citizens of the United States and of the state wherein they reside.” Seems pretty clear to me.
Not only does the bill seem to stomp on the Constitution (and would likely be overturned by the US Supreme Court) it also appears to be overwritten. The bill would limit citizenship to permanent residents, thus leaving out people here legally on tourist visas, business visas, student visas or anything but permanent residents. And one analyst thinks it would deny citizenship to the children of US citizens who happen to be born outside of the US, like the children of military members or military service people on duty overseas. Not very patriotic for a party that prizes patriotism.
A group of people opposed to the so called “anchor baby” legislation gathered at the State Capitol to show their displeasure at the bill. One of the protestors came dressed as an “anchor baby,” the derogatory term the right uses to describe these US citizens.
Posted by Jack at 01:25 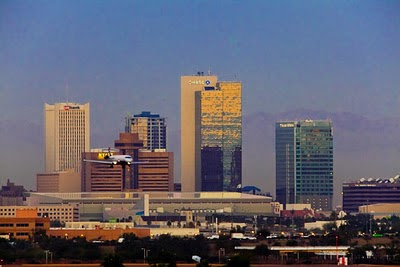 A US Airways flight lands at Phoenix Sky Harbor Airport Tuesday morning. Most of the tall buildings in downtown Phoenix face due east. The glass ones take on a golden glow for the few minutes that the sun strikes them from a low angle.
This photo was made with a Canon 5D Mark II, a Canon 300mm lens and an EF 2X teleconverter, the ISO was 1600. I was about three miles from downtown and even though the camera was on a tripod, the combination of long lens (total focal length 600mm) and low light made camera movement a significant problem. Many of the frames showed significant amounts of camera movement.
There are more photos of sunrise over Phoenix in my archive or available from ZUMA Press.
Posted by Jack at 11:09

Email ThisBlogThis!Share to TwitterShare to FacebookShare to Pinterest
Labels: Cityscapes, My Work

A Candle Against the Night 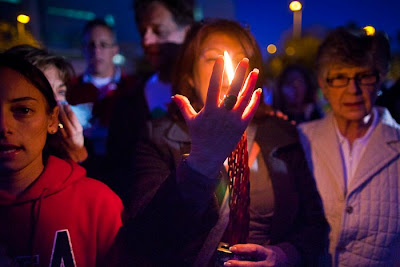 A woman holds up a candle during a Jewish prayer service for Gabrielle Giffords, and other victims of the mass shooting, on the lawn at University Medical Center in Tucson Saturday night.
I went back to Tucson today to see how people were coping after the shock of mass shooting one week ago. The initial shock has been replaced by more complex emotions. Sorrow for the families of the deceased. Hope for the survivors. Anger at the shooter. And still the question, why? A question that is mocked by the haunting smile of the alleged attacker’s “mugshot.”
The employees of the Safeway where the shooting happened came out for a small service at 10:10AM, the exact time of the attack. Some of the employees were still so heartbroken, a week later, they couldn’t participate. The emotional scars from the attack will take far longer to heal than some of the physical ones.
Candles line the sidewalk at Gifford’s office. A steady stream of people come by to drop off cards, flowers, teddy bears and notes.
Flowers, pictures, candles and children’s toys cover the lawn at University Medical Center, where Giffords and most of the others injured in the attack, were sent in the frantic moments after the barrage of gunshots.
People walked quietly through the field of flowers. Some were lighting candles, others stopped to pray, some hugged, some cried. Mournful music filled the air as a man played the violin for hours, improvising.
Later a small mariachi group performed. Giffords, a native Tucsonan, is a big fan of mariachi music. Hospital staff told the musicians their playing could be heard in the Congresswoman’s room. Just before dusk the mariachi trumpeter played the “Star Spangled Banner.” People stopped what they were doing to sing along with him as he played.
At sunset, members of Tucson’s Jewish community gathered for a religious service on the lawn.
There are more photos from Saturday in Tucson in my archive. Saturday’s photos are also available from ZUMA Press.
Posted by Jack at 01:42 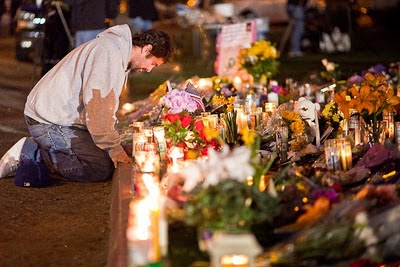 A man prays for Congresswoman Gabrielle Giffords and others shot by a lone gunman during one of the Congresswoman’s events at a strip mall in north Tucson Saturday, January 8.
The nation was stunned Saturday when Democratic Arizona Congresswoman Gabrielle Giffords was shot by a 22 year old man during Giffords’ “Congress on Your Corner” event. Giffords was shot in the head but survived, and by all accounts is making a remarkable recovery at University Medical Center in Tucson. Nineteen people were shot in a few seconds.
Read more »
Posted by Jack at 11:31