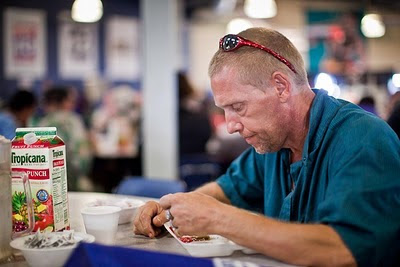 Today is the 350th Feast Day of St. Vincent de Paul, the “Apostle of Charity.” The society that today bears his name is dedicated to carrying on his work. In Phoenix, theSociety of St. Vincent de Paul serves lunch to about 1,100 people a day. And as the reality of the “Great Recession” that started during the Bush administration continues to grip the Phoenix area, demand for the Society’s services continue to grow.
It’s an unfortunate twist of fate that the Feast Day of St. Vincent de Paul is being celebrated just days after US Census Bureau reports reveal that in the United States, the richest country in the world, the poverty rate hit 14.3% in 2009. One in seven Americans now live below the poverty line. It’s the highest the poverty rate has been since 1994 and comes at a time when Republicans want to extend tax cuts to the wealthiest Americans and limit unemployment benefits to the victims of the Bush recession. Something to think about when the rest of us sit down for dinner tonight.
There are more photos from St. Vincent de Paul in my archive and available fromZUMA Press.
Posted by Jack at 17:05