Hoping to Make a Sale 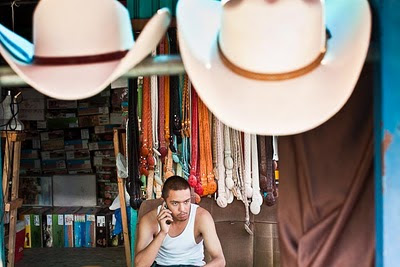 A vendor at El Gran Mercado (The Big Market), a sprawling outdoor flea market that caters to Latino immigrants waits for customers in his hat stall. El Gran Mercado is the largest flea market of its type in the Phoenix area. Small mom and pop vendors sell cowboy hats and boots, Ranchera and Mariachi tapes, pinatas and lucha libre (wrestling) paraphernalia. The food stalls sell things that are hard to find in mainstream Phoenix restaurants, even Mexican ones, like birria chivo (goat stew) and menudo (tripe). Signage throughout the market is in Spanish, which is more widely spoken in the market than English. The concert bandstand has regular lucha libre shows that draw thousands of screaming fans. Shopping at El Gran Mercado is like making a run to a small town south of the border.
The market appears to be changing. Yesterday it was empty. Fewer than 1/3 of the stalls were open. The remaining restaurants had paltry crowds. I saw only one customer in the beauty salon all afternoon. I asked El Payaso, a clown, trying to entertain a handful of children where all the people had gone. Looking around atop his stilts he said, “they’re gone.” Waving his hands, he added, “like the wind, phhht.”
He said they’ve been leaving since April when Arizona Gov. Jan Brewer signed SB 1070. Then he said even more would be leaving by Wednesday (the law goes into effect Thursday) because immigrants are convinced Maricopa County Sheriff Joe Arpaio would set up roadblocks around Phoenix and arrest Mexicans trying to leave. Then the laughing clown got serious for a moment and said, “For us this is like Germany in the Nazi time. We are being hunted, like the Jews were.”
Whether or not it’s true, members of the immigrant community believe it is true. As a result, thousands of hard working people are “self deporting” ahead of the law, either moving back to Mexico, or, more frequently, moving on to other states in the US. Places that are, at least for now, more friendly to immigrants. States like Pennsylvania, Oregon or Illinois. Businesses that cater to the immigrant community, like El Gran Mercado, are suffering as vendors and customers pack up and head out. And Phoenix is losing a landmark.
Other signs of the exodus abound. For rent signs are springing up around town as apartments lose tenants. Class sizes are expected to be smaller as students leave with their parents and wait times in hospital emergency rooms are reduced as illegal immigrants no longer use the ER for primary care. These are the intended consequences of the law.
The unintended consequences will come in later this year or early next year when apartment owners, already stressed by the weak economy, could be forced to abandon their properties. When schools, who have had their state aid reduced because of smaller student populations are forced lay off teachers or when hospitals have to layoff care givers because they have fewer patients.
Of course this is all speculation. No one really knows what’s going to happen on July 29. The anecdotal evidence that immigrants are leaving the state is overwhelming, but there are no reliable numbers. States across the southwest have wrestled with illegal immigration for decades. But none have ever tried what Arizona is doing (SB 1070 may not even be constitutional. There are at least three lawsuits challenging the law in federal court.) We will get our first statistical evidence of the exodus when school starts in August. If schools with high immigrant populations indeed have much smaller student bodies then we’ll know the anecdotal is correct.
There are many more photos from El Gran Mercado and related to SB 1070 in my archive and available from ZUMA Press.
Posted by Jack at 23:08