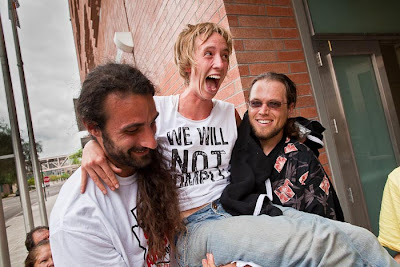 Protesters opposed to SB 1070 and Maricopa County Sheriff Joe Arpaio carry one of their colleagues on their shoulders after she was released from the 4th Ave Jail in Phoenix this morning.
She was one of the more than 60 people arrested in Phoenix this week during a series of peaceful sit-ins and demonstrations against the law and the Sheriff. The actions have been planned since April when Arizona Gov Jan Brewer signed 1070. On Wednesday of this week Judge Susan Bolton blocked enforcement of some sections of the bill, including the one that mandates police officers check the papers of suspected illegal immigrants. The judge’s order took some of the wind out of the protesters sails. So rather than demonstrate against the bill, the Sheriff became the target of their wrath.

And he’s an easy target. He’s conducted 17 “crime suppression sweeps” in heavily immigrant communities; pulling over people for minor traffic infractions and then using that as an excuse to check papers. He’s raided workplaces looking for evidence of illegal immigrants using forged papers or stolen IDs. He even raided city buildings in Mesa after the Mesa police chief and mayor said they did not welcome his “crime suppression sweep” in their city.
More than 50 protesters were arrested Thursday, July 29, during a series of sit-ins that blocked traffic on Washington Street in front of the Sheriff’s office and blocked access to his jail intake area on Madison Street. Another dozen or so protesters were arrested Friday during a demonstration against the Sheriff at his offices on Lower Buckeye Road.
In this round of protests the protesters claimed a victory of sorts because the protests were so large that the Sheriff had to divert resources away from the sweeps to control the crowds around the jails.
There are more photos related to SB 1070, the protesters’ releases and the immigration issue in my archive and available from ZUMA Press.
Posted by Jack at 21:48