This Time We Mean It 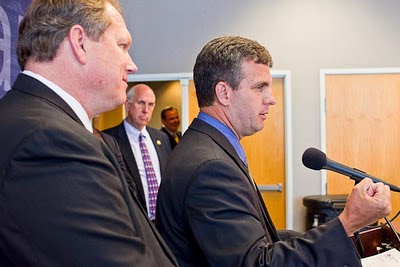 Mesa City Manager Chris Brady emphasizes that Mesa has figured out how to fund the Chicago Cubs spring training facility during a press conference in Mesa Thursday.
Back in January a bunch of Arizona Republicans and politicians from the Phoenix suburb of Mesa stood in front of the media and announced that Mesa had figured out a way to keep the Cubs in Mesa for spring training. It’s a big deal because spring training in general, and the Cubs in particular, bring in millions of dollars.
The deal was based on getting some money from the Tourism and Sports Authority, raising some taxes on services tourists use (rental cars) and a fee on Cactus Leaguetickets.
Almost nobody, except Mesans, liked the deal. Other Cactus League teams didn’t want their fans to pay for the Cubs’ stadium and this is not the year to raise taxes in Arizona’s libertarian leaning legislature. Even taxes that out of state folks pay, so the deal languished in the legislature.
Mesa has until July to secure a deal, after that the Cubs can start talking to other communities about their spring training needs. Florida would love to land an Arizona team since Arizona has been stealing Grapefruit League teams for years.
Today Mesa Mayor Scott Smith, (left in photo) City Manager Chris Brady and Cactus League President Robert Brinton (right in photo) held a press conference at Mesa’s city hall to announce that they had figured out how to build the stadium without using TSA money and not involving the state legislature.
They’re going to sell land. Back in the 1980’s Mesa bought tens of thousands of acres in neighboring Pinal County to secure water rights to the land. They never had to tap into the water and haven’t used the land so they’re going to sell it to pay for the stadium.
So, assuming the math works out, it looks like the Cubs are going to stay in Mesa.
Posted by Jack at 22:26