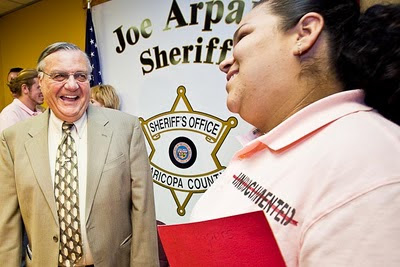 There was big news in Phoenix today.
Maricopa County Sheriff Joe Arpaio met with a group of allegedly undocumented students from Miami, FL., and he didn’t arrest them. The students, who walked from Miami to Washington DC on the “Trail of Dreams” to promote immigration reform, came to Phoenix to meet with “America’s Toughest Sheriff” to try to talk him out of arresting undocumented immigrants when SB 1070 goes into effect of July 29.
The students had a cordial meeting with the sheriff, who was at his most charming. The two sides talked for about 45 minutes in polite, sometimes cheerful, but always serious banter. In the end, both sides essentially agreed to disagree. The students said arresting people because of their immigration status was morally wrong, the sheriff said he was duty bound to uphold the law, and if the law mandates arresting illegal immigrants he was going to arrest illegal immigrants.
The students told members of the media before the meeting that based on their immigration status, they were prepared to be arrested. They even brought a lawyer with them. But the sheriff never came right out and asked the kids what their immigration status is and the students never came out right and said “we’re undocumented” so no one was arrested.
The room was packed with media people, some from as far away as Spain, who were expecting a confrontation between the students and the sheriff and the students’ subsequent arrest. I think they were a little disappointed that no one was led away in irons.
Posted by Jack at 22:23