McCain on the Stump 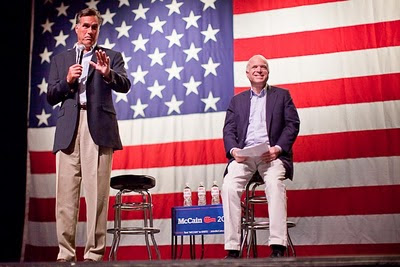 John McCain has been hitting the campaign trail hard this spring and summer. The long serving Republican Senator has been holding “Town Hall” meetings all over the state. Earlier today he had former Massachusetts Governor Mitt Romney campaigning with him at Mesa High School in the Phoenix suburb of Mesa.
They used their time at the microphones to blast the Obama administration (and “liberal media”) on everything from health care to immigration to “big government.” It was kind of entertaining even if most of if what they said was somewhat misleading.

McCain said he was tired of Obama appointing “Czars” to oversee government functions and that it violated the advice and consent portion of the constitution. He didn’t mention that Richard Nixon, a Republican, was the first to appoint a Czar (in the “war on drugs.”) Or that Republicans, who have controlled the White House for 28 of the last 41 years, have used Czars as enthusiastically as Democrats have.
McCain blasted the President’s health care reform but didn’t mention medicare (understandable since most of McCain’s constituents are on medicare).
He repeated the Republican canard that the border is “out of control” but no mention of the fact that the number of border crossers is down significantly and that the violence on the border is a result of tougher enforcement on the border or the supply of US assault weapons going into Mexico.
The crowd ate it up and applauded enthusiastically.
NPR did a story tonight that incumbents in Washington are in trouble and that right wing candidates are faring better in primaries than centrists or left leaning candidates.
Using that measure, McCain has a tough race ahead of him. He’s been in Washington since 1982, in the Senate since 1986. He’s the personification of an incumbent. He has a mixed voting history, siding with the late Ted Kennedy (an anathema to Arizona conservatives) and Joe Lieberman on issues as diverse as immigration and global warming. At the same time his opponent is JD Hayworth, an arch conservative who opposes gay marriage because it could lead to people marrying horses.
I guess it makes sense that McCain would tack to the right. McCain’s problem is that it is hard to tack to the right of JD Hayworth, the “Consistent Conservative.”
There are more photos of John McCain (and JD Hayworth) in my PhotoShelter archive and available from ZUMA Press.
Posted by Jack at 23:54