This Is A "Rubber" Bullet 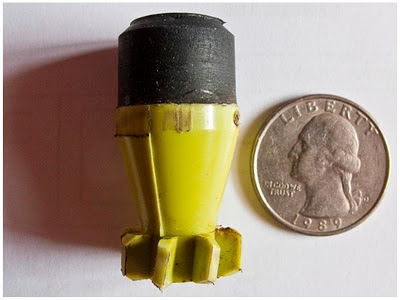 This is a rubber bullet fired by Thai troops at protesters Friday, I put the quarter next to it for scale. The first time I saw one of these, I thought, “wow, that’s big.” This was one was fired from a 12 gauge shotgun. The fins at the back stabilize it in flight, making it a little more accurate. Security forces are also firing rubber bullets from M16‘s and the other assault rifles in the Thai inventory. These litter the ground at conflict sites in Bangkok like stale popcorn on the floor of a movie theater.
When you hear the term “rubber” bullet you may think nerf ball. This ain’t that. It doesn’t bounce and it’s not a toy. The green part of the body is hard plastic, the nose is rubber and both parts are wrapped around a metal rod. It’s fired from a shotgun using reduced powder charge so it’s effective range is pretty short, probably under 100 yards. It’s considered a “less than lethal” weapon. But that depends on where it hits you and how close you are to the person shooting. At close range a head shot will kill you. Even at a distance, you can suffer serious injury from a broken bone to losing an eye.