Our Angels Have Deserted Us 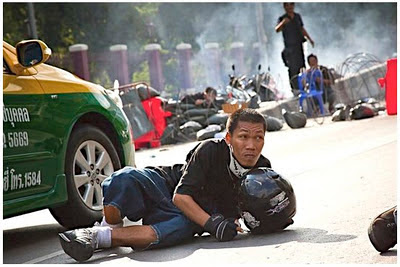 One of Bangkok’s nicknames is the “City of Angels.” This morning that’s a lie.
Last night the Thai government started its crackdown against Red Shirt protesters that have gridlocked Thailand’s capital since mid March. The government promised the mother of all crackdowns with APC’s, HUMVEES and live ammunition. Instead it was one well placed rifle shot. A sniper shot the Red Shirts unofficial military leader Seh Daeng in the head. At this time he is comatose in critical condition. The government denies any role in the shooting, but Seh Daeng has been a huge thorn in the government’s side for months now and some say he is behind the series of M79 grenade attacks that have plagued this city for months. Taking him out of the picture would be a top priority for the government.
Later in the night, street fighting broke out between gangs of Red Shirts and isolated military checkpoints around the Red Shirt camp.
This morning the Reds captured one of the army checkpoints on Rama IV Road. I left my apartment at 6AM and got to Rama IV just after the Reds’ “victory.” They were still wound up from pushing back the troops and stopping cars to search for pro government people. It was chaos.
Shortly after I got there, an army patrol of eight men on four motorcycles drove past the Reds on the opposite side of Rama IV. The Reds, who by now had degenerated to a mob, went wild. They started launching small rockets towards the soldiers and throwing rocks at them, some of the Reds were using slingshots to get extra range and effectiveness.
The soldiers tried to exit the area but the back seat riders (they were two up on each bike) ended up returning fire with shotguns as the drivers swerved around pedestrians and mailboxes. I took cover behind a concrete wall in the median, between the two sides, with other photographers. The Reds continued to fire their rockets while civilians trying to get work (Bangkok is still sort of a functioning city, and this was outside the protest zone in an area thought to be safe) ran for cover. I think 8 or 10 shots were fired but I’m not sure.
As quickly as it started it ended. The soldiers were gone, no one was hurt and the Red mob seemed to heave a collective sigh and calm down.
I stayed with the Red mob for an extra couple of hours while they vandalized a riot control truck and continued to fire rockets towards military helicopters in the area. One army patrol approached the Reds and talked to them, but now cooler heads had prevailed and the Reds didn’t do anything rash.
There are more photos from today’s activities in my PhotoShelter account and available from ZUMA Press.