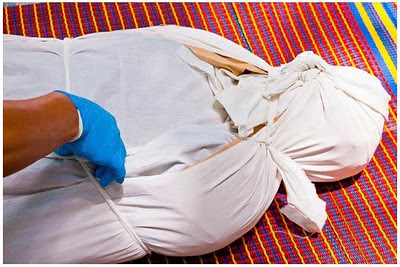 A medical worker rests his hand on the shrouded corpse of a person who died during street fighting in Ratchaprasong Intersection Wednesday. Authorities found six bodies in Wat Pathumwanaram, next to Central World, when they went into it this morning. The bodies found in the temple bring the death toll to at least 12, but it is certain to go up. No one knows yet if anyone died in the blazes the consumed the downtown malls. (NOTE: The latest casualty count is 52 killed, 406 injured since the first fighting on May 14. This has been the bloodiest week in Bangkok in years. MAY 21)
Bangkok woke up this morning with a massive hangover from its orgy of violence Wednesday. The hangover brought silence and some peace to the city. The curfew held overnight, most of the fires were out or close to out and the cleanup started. If you had a reason to be on the street you could move about reasonably freely.
I drove around Bangkok some before going down to Ratchaprasong Intersection, ground zero for the Red Shirt protest and the objective of Wednesday’s military attack.
Parts of the city are a mess but people were out cleaning up and the tension and violence that’s marked the last month or more is greatly reduced. There’s a huge military presence on the streets and they are stopping Thais to check IDs and searching vehicles for weapons.
Ratchaprasong is devastated though. Central World, the second largest mall in southeast Asia and the cornerstone of the Ratchaprasong retail environment, is gone. Fire gutted the building and now, like a some kind of prehistoric animal in its death throes, the building is collapsing bit by bit, girder by girder. Like wheezing exhalations of breath, smoke is still coming out of the building and every once in a while you hear a large groan of metal grinding followed by a crash as a part of the building falls in.
The movie theaters are gone. They were the first to go, burned to the ground and collapsed by late afternoon Wednesday.
Another department store, “Big C” was gutted by fire. Firefighters were still inside the building this morning. There’s nothing left but a blackened shell.

The Erawan Shrine, kitty corner from Central World, and one of my favorite places in Bangkok, was miraculously unscathed in the battles and fires.
But the most gruesome discovery of the day was at Wat Pathumwanaram, next to Central World and across the street from the Royal Thai police headquarters. Thousands of people, mostly women and children but apparently also some armed Black Shirts, took shelter in the temple. The temple was supposed to be a safe haven for non combatants and bringing weapons in was a strict violation of the informal rules set up to protect the women and kids.
The people who sheltered in the temple were moved across the street to the police headquarters and ultimately given transportation home. Thousands jammed into the police compound.
The Black Shirts (the mysterious Black Shirts are thought to be the militia of assassinated Red Shirt military leader Seh Daeng) brought weapons into the temple and fired on troops. Troops returned fire and six people were killed, some Black Shirts, some protesters and some medical workers trying to bring the injured to safety. Their bodies were found and removed this morning.
The are more photos from this morning’s clean up in my PhotoShelter archive and available from ZUMA Press.