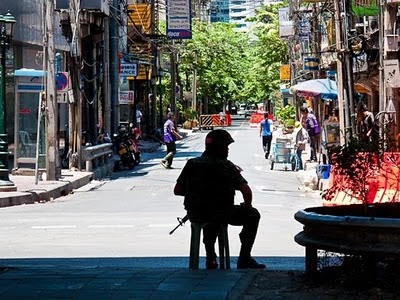 A Thai soldier on guard duty in an intersection on Silom Road Friday. Bangkok is trying to return to normal, but this is no “Mission Accomplished” moment. It’s more like a breather in what promises to be a long road to recovery.
This is my last day in Bangkok. Very early tomorrow morning I catch a United Airlines flight home. This seems like a good time to reflect on the last two months.
I came here in March to work on stories about the environment and climate change. I made my travel plans in December, months before the Red Shirt protests. When the Reds started their protest in early March, I assured everyone that the protests would be over before I got in or would end shortly after I got here. In the back of my mind there were some thoughts that it might drag on or end violently but I didn’t think it drag on as long or end as violently as it did.