Destroying A City The Thai Way 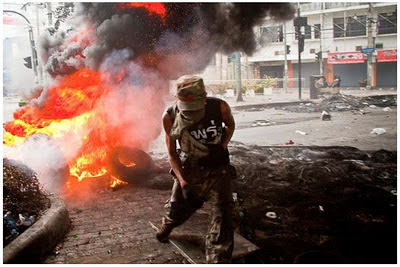 An anti government protesters turns away after setting a tire barricade on fire in the Din Daeng Intersection.
Today was quiet in Bangkok. There were a couple of arson fires and lots of burning tires but so far there have been no reports of shooting or wholesale bloodletting. Given what the city’s been through since Friday, that’s progress.
I think most of the “main stream media” is missing the big story here. These protests have spread well beyond Red Shirts and Yellow Shirts. Since Friday night it’s been Bangkok’s underclass and slum dwellers, allied with some Red Shirts, vs. the government. The Red Shirt stage, in the center of the city, has been the safest place in town for the last four days. (NOTE: That will change the instant the “crackdown” starts.) The trauma has taken place on Rama IV and Din Daeng and most of the protesters are not members of the Red Shirts. That’s not to say they don’t support the Red Shirts. They do. But they are not Red Shirts from up country.
The protests since Friday afternoon have made public the splits in Thai society, between the middle and wealthy classes the vast number of Thais living in poverty. Looking at the photos from today’s scene at the Din Daeng barricade it’s clear. These aren’t farmers. They’re the urban poor.
Just as troubling is the way government security agencies are lining up. During the early days of the Red Shirt protest, back in March, the Royal Thai Police would bring water to the Reds during their marches. They stopped Red Shirts to take photos with them. Sunday, at the Rama IV barricade, police helped protesters erect barricades.
Last night at Din Daeng, protesters set a tire barricade on fire. When it threatened to go out of control, the police put it out and the protesters who started the fire applauded. Today, police passed through the protesters’ Din Daeng barricades freely all afternoon.
It was the police who allowed Red Shirt leaders to literally walk away after a botched attempt to arrest them at a meeting in a four star hotel.
The main gate to the Royal Thai Police headquarters is right next to the main protest stage in Ratchaprasong. You’d think, given the tension, that there would be a massive security presence there. You’d be wrong. Unless two unarmed beat cops in lawn chairs is a massive security presence.
Then there’s the army. There’s little doubt in the minds of most of the protesters that their enemy is the army. It’s the army who has repeatedly opened fire on protesters when there’s been violence during the protests.
It was the army who opened fire on Red Shirts in April 2009 during the Songkran Riots.
It was the army who ousted Thaksin, their hero.
I don’t think the government can count on the police to support the army in case the real crackdown comes. (Amazingly, the violence we’re seen so far is not even the main crackdown. According to the government, we’re still in the early stages of a multilayered approach to solving the crisis. The crackdown is yet to come.)
Today I went to the Din Daeng barricades, near Victory Monument. These barricades were the scene of heavy fighting and numerous sniper attacks over the weekend and on Monday.
Today it was quiet. Protesters were making tire barricades and lighting them on fire. Some were setting off their rockets and launching ping pong bombs. Others were throwing petrol bombs towards the troops. But the soldiers, who were several blocks away did not respond.
The are more photos from the Din Daeng barricade in my PhotoShelter archive and available from ZUMA Press.