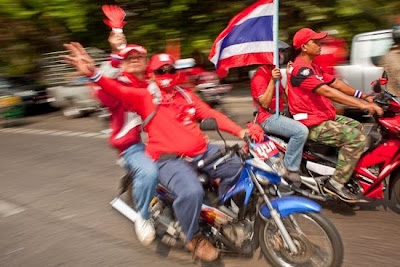 Sanuk is a Thai word roughly translated as deriving pleasure and joy from something. Not just when you’re on vacation or at a movie, sporting event or holiday, but all the time. At work, in the car or even at a political protest.
That has certainly been the case the last two days as the protests, which if you look at the Red Shirts’ demands (the dissolution of Parliament and resignation of the Prime Minister) are very serious. Despite their serious demands, the Reds seem to be having a ball. Yesterday’s march was as much carnival parade as protest. And today, when the Red Shirts went to the Army barracks that has become the de facto center of power, because the security services command center is here and the Prime Minister is living at the base, there was a definite party atmosphere. This time they were prepared for the party - Red Shirt refreshment stands, snack stalls and souvenir stands were mixed in with the protestors.
There is still no end in sight for the protests, but it appears as though the Prime Minister blinked first. Red Shirt leaders announced while I was there that the PM has agreed to sit down and negotiate with the Red Shirt leaders. The negotiations are supposed to start later today at a neutral venue.
Posted by Jack at 05:33