Protest Against the Sheriff 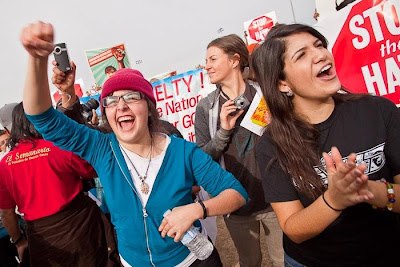 Women from Los Angeles at a demonstration against Sheriff Joe Arpaio.

There was another march against Maricopa County Sheriff Joe Arpaio in Phoenix today. Protests against the sheriff have become the norm.

Members of the immigrant community say he racially profiles people he detains for immigration violations. Maricopa County officials allege he uses the sheriff’s department and investigators in the department to go after his political foes. He is investigating judges who rule against him.

The US Justice Department has taken notice and convened a grand jury to investigate the sheriff. His opponents smell blood in the water and have ramped up their protests.

What made today’s protest different was the size. At most rallies a couple of hundred to a thousand people show up. Today more than 10,000 people, some from as far away as Los Angeles, marched the 2 1/2 miles from a park in central to Phoenix to the jails.