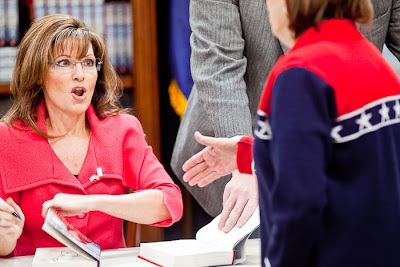 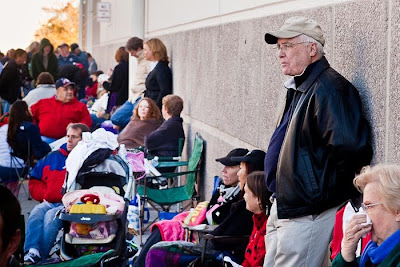 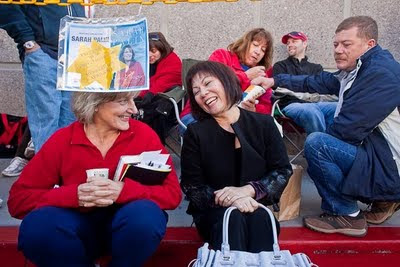 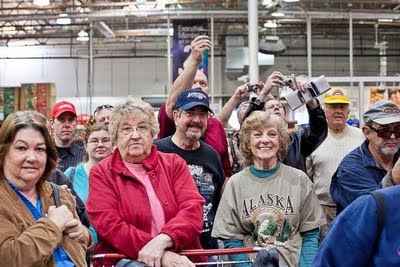 Sarah Palin, the bright light of the conservative movement, brought her traveling road show to Tempe this morning pitching her book, “Going Rogue.” It was more like a campaign stop than a book signing but well over 1,000 people showed up to get her autograph in the book.

The rules were simple, people could take pictures of Palin, but not pictures with her. And she would sign books but not personalize the autograph.

There’s no denying that Palin has become force to be reckoned with in American politics. Her fans are rabid and she’s shown that she can impact races well beyond Alaska.

I don’t get her appeal. Her resumé is pretty thin. Mayor of Wasilla, AK, (population 10,256 in 2008) and Governor of Alaska. And she quit that job in the middle of her first term. But her appeal endures.

It’s the little things you notice at an event like this. In my case it was the music.

The ELO song “Evil Woman” was on the radio as I pulled into the Costco parking lot. I almost always listen to NPR, so when I switched to commercial radio and Evil Woman was on I took it as a sign of something. I’m not sure what though.

And as Palin walked into Costco, the Kid Rock song “All Summer Long” was playing for the waiting crowd. A song about smokin’ dope, premarital sex and an homage to “Sweet Home Alabama.” (Most famous line: “Well I hope Neil Young will remember; A Southern Man don’t need him around anyhow.”) Perfect.