A herd of Zombies (I’m not really sure what you call a group of the undead) invaded Phoenix tonight for the city’s first Zombie Walk. About 200 people participated in the mile and a half shuffle, which ended, oddly enough, in a bar.

They wandered through downtown mingling with shoppers, people on their way to theatre events and sports venues, attacking random “victims” gnawing on their extremities and trying to consume their brains.

Some passersby didn’t quite know what to make of the undead, but most took it in the spirit with which it was intended.

There are more photos from the Zombie Walk in my PhotoShelter archive and atZUMA Press.

Email ThisBlogThis!Share to TwitterShare to FacebookShare to Pinterest
Labels: Fun, My Work

What Could Possibly Go Wrong? 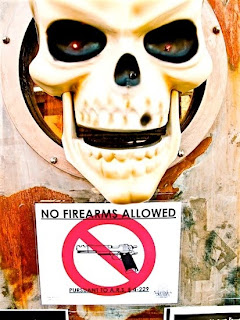 With having a gun in a place where liquor is consumed and judgement is impaired?

The Republican controlled legislature thinks it’s a fine idea and they passed a bill allowing the state’s 5,800 residents who have permits to carry concealed weapons to bring their concealed handguns into bars and businesses serving alcohol. And the Republican governor signed it. (In the meantime the state still doesn’t have a balanced budget and is nearly bankrupt.)

On Tuesday, Sept 30, it became legal to pack heat in Arizona bars. Supporters of the bill say it will make bars a safer place because if someone tries to stickup the bar the law abiding, pistol packing, patron can haul out his piece and “cap” the bad guys. Opponents of the bill counter that mixing booze and bullets is a bad idea. The catch for the pistol packing patrons is that they aren’t allowed to drink while they’re “packing.” Sort of a designated shooter law.

Bar owners, bar tenders and folks in the hospitality industry were opposed to the bill. They lobbied against it but lost. The compromise struck was that bar owners can post an 8.5 X 11 sign prohibiting guns in their bars. This sign is posted at the entrance of Mexican restaurant in Tempe. The skull is a Halloween decoration, not a misbehaving patron.

This is an example of why I carry a camera, in my case a Canon G10, everywhere I go. I made this photo on a day off walking past the bar. I made a couple of quick frames with the G10 and kept walking.